Marine fungi have been found in almost every marine habitat yet explored. From surface waters to kilometers below the seafloor, they appear ubiquitous and do have non-trivial roles in global biogeochemical processes as saprotrophic degraders or parasites at numerous trophic levels. From an ecological angle, marine fungi thus clearly contribute to the complexity and dynamics of the marine microbiome. Marine fungi can also be viewed as microbial factories able to produce a wide array of valuable compounds known as secondary metabolites. The tremendous interest on Marine Fungal Natural Products has allowed to reach ~300-400 new compounds described per year since early 2010’s. Marine fungal diversity and chemodiversity appear as hot topics with an obvious potential which can be leveraged in numerous biotechnological applications in many areas including health, cosmetics, agri-food industries, etc…

The Marine Natural Products Team, which is part of the Institute of Chemistry of Nice at the University Côte d’Azur (France) cordially invites you to the 3rd International Conference of the Marine Fungal Natural Products (MaFNaP) that will be held online from July 19 to 20, 2021. This event will gather an international audience to discuss new developments and approaches within the field, enhance awareness on marine fungi as a sustainable resource for blue biotechnology and highlight the potential of marine fungal metabolites in various areas. It also serves as a forum for networking and promotion of young scientists working in the field. 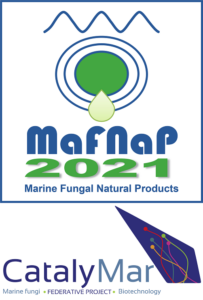